Announcing the addition of Robyn Pauhl

The Jimmy Stahl Big Band is VERY pleased to announce the addition of Robyn Pauhl as one of our newest name plate entertainers. Robyn is a beautiful, talented and brilliant entertainer who will be a great addition to our shows. For more information about Robyn click here. Stay tuned! There's more to come!!

We're excited to share that this year the Jimmy Stahl Big Band was nominated six times and took home NMA's 2020 Producer of the Year thanks to the talents of our very own Brandon Walker. He produced, mixed and mastered the tracks after the recording sessions at Jukasa Studios in June 2019. 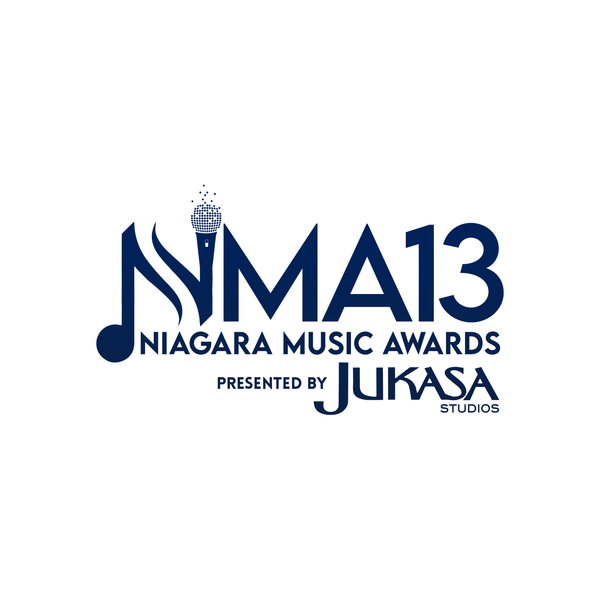 We are so thrilled to see so many visitors from around the world stopping by our website and enjoying our music!

So far we have fans from:

THANK YOU FOR SUPPORTING JAZZ!

We are so very fortunate to have been featured on "Canada's Jazz Station" JAZZ FM 91.1 The Big Band Show thanks to their longest-running host Mr. Glen Woodcock, who's show airs Sundays 5-10 pm. Throughout the year Glan has played selections from  "Swingin' In The Pews", and "I Just Found Out About Love" and "Swingin' On a Star".

Check out his playlists here!

Glen Woodcock, the current iron man of Toronto radio, grew up in the city and fell in love with big band music as a teenager, at the height of the rock ’n’ roll craze. He bought as many big band and jazz LPs as he could afford, first at Sam’s original store on College Street, then at Sam’s and A&A Records’ Yonge Street locations. He also frequented antique and junk stores where he would buy every 78 rpm big band record he could find.

Those LPs formed the basis of the collection he still uses on The Big Bands with Glen Woodcock, which celebrated its 42nd anniversary on JAZZFM.91 in September, 2018.

During his years as a broadcaster, and entertainment editor at the Toronto Telegram, he got to meet some of the greats in the world of jazz – Duke Ellington, Count Basie, Buddy Rich, Ella Fitzgerald, Mel Torme and many, many more.

Thanks to the compact disc, Glen says the biggest difference between now and when he started is the number of Canadian big band recordings available for use on his shows. In the 1990s he and wife Connie launched their own small record label, formed to preserve the sounds of Canadian big bands in the 1940s.In November, 2017 he was given the Ken Page Memorial Trust’s Lifetime Achievement Award at a gala, star-studded jazz dinner at the Old Mill in Toronto.

Media Coverage from The St. Catharines Standard by John Law

Thanks to John Law, our new releases were featured across Niagara in all three papers! You can check out Jimmy's interview with John here: 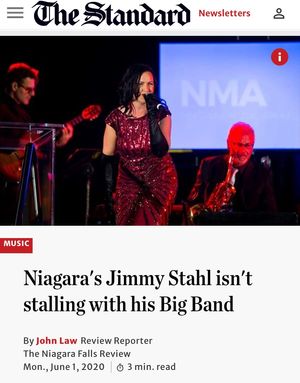 Thank you to Dave Bennison at Q4680 for the wonderfully entertaining chat about the two new album releases by the Jimmy Stahl Big Band! 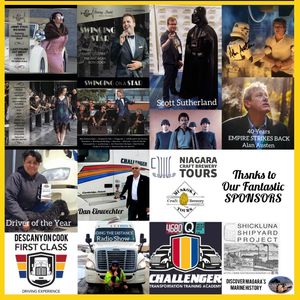 EXTRA! EXTRA! READ ALL ABOUT IT!

The long-awaited for albums are both complete and available online! Last summer, the Jimmy Stahl Big Band recorded two albums over two days at the state-of-the-art Jukasa Studios in Ohsweken, Ontario. It was a jam-packed two days of recording, but we were in the very capable hands of a multi Juno Award-winning team, senior recording engineer Darren Magierowski and Jill Zimmermann. They really did an outstanding job of capturing the “Live Off The Floor” sound of the band. Then came the mixing and mastering which was done by Brandon Walker, a musician and soloist in the band who received his training in Hollywood California, and just so happens to have worked for both Capitol and Cherokee Records. The engineers were an absolute dream to work with and did an incredible job on the recording and post-production work. In my experience, your choice of studio and sound engineers can either make or break a project. But you also have to have something special to start with, and that something special is every single member of The Jimmy Stahl Big Band and these two fabulous entertainers, Geneviève-Renée Bisson and Michael Vanhevel. Together they all create a magic that you can hear and feel on both of these albums. They have truly caught the feeling of sitting in a live performance.

“I Just Found Out About Love” with The Jimmy Stahl Big Band features Geneviève-Renée Bisson and is a tribute to the Ladies of Jazz. Every song on this album is a show stopper and features various hits from leading ladies such as Diane Schuur, Natalie Cole and Shirley Bassey. We mix up the styles including ballads, swing and blues using the original arrangements from Bob Foster, Nelson Riddle, Ralph Carmichael and more. Geneviève-Renée performs beautifully on this project and you will fall in love with her talent. Be prepared to be musically seduced by this songstress.

“Swinging On A Star” with The Jimmy Stahl Big Band features Michael Vanhevel and is a tribute to Frank Sinatra and The Great American Songbook. This album features some of Frank Sinatra’s biggest hits using original arrangements from Nelson Riddle, Ralph Carmichael, Ralph Sharon and other greats. Michael Vanhevel is one of the finest up and coming young crooners in Canada today. You will be mesmerized by his smooth velvety style. Be prepared to be transported back in time when Big Bands ruled the airwaves! 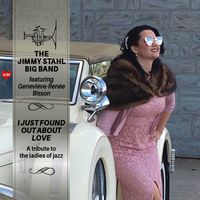 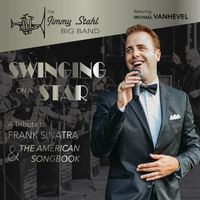 Save The Date! Hey Everyone, I'm pretty excited about our next big show only a few weeks away. The award-winning Jimmy Stahl Big Band featuring both Geneviève-Renée Bisson and Michael Vanhevel, 2019 Niagara Music Awards Jazz Artist of the Year, will be the main event at Heart Niagara "Roaring Twenties" Fund Raising Gala at the Americana Resort and Spa. You're 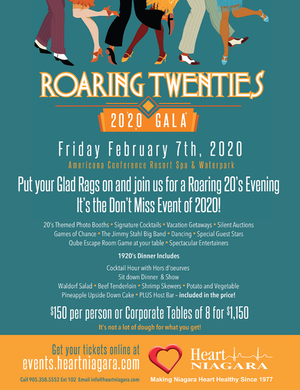 all invited to come dance the night away with the Jimmy Stahl Big Band, celebrating an early Valentine’s. You can see Niagara Falls and support a charity focused on heart health Friday February 7, 2020.

The Americana Resort and Spa is hosting the event and is offering a great rate to stay. https://www.americananiagara.com/

When booking use Promo Code twenties to receive a preferred rate and you can order your tickets all online.

You need to get your tickets fast, they're already over 60% sold out! What a great way to spend an early Valentine's with the Love of your life!! 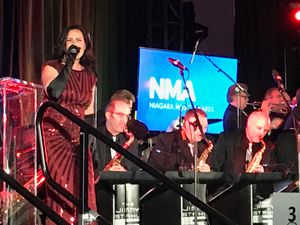 2019 NMA Jazz Artist Of The YEAR! WOW!!! What a great night at the 2019 Niagara Music Awards! I'm still pinching myself to make sure it wasn't a dream. It was such an honour to have been nominated in 2 categories, with over 700 musical submissions and then to be asked to perform at the 2019 NMA Gala it was all incredible. To top it all off - Geneviève-Renée Bisson and The Jimmy Stahl Big Band won the 2019 Niagara Music Award for Jazz Artist of the Year! None of this would have been possible with out the amazing talents of all the musicians in The Jimmy Stahl Big Band, an absolute powerhouse band.

Special thanks to Jukasa Studios, Darren Magierowski and Jill Zimmermann our sound engineers, Todd Brown and Dave Grand of The Niagara Music Awards and John Law who has always been so supportive of us with articles and feature stories in the Review and Standard and to Chico Sanchez and Dylan Marz, our biggest promoters. Last but not least - Thank you to all of our friends and fans!! We love you all! Stay tuned for what's next. Exciting days ahead. 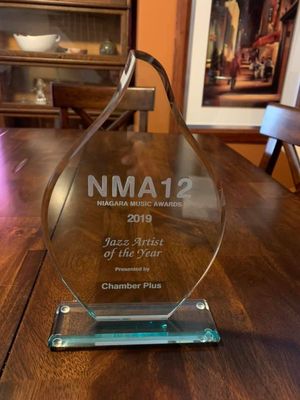 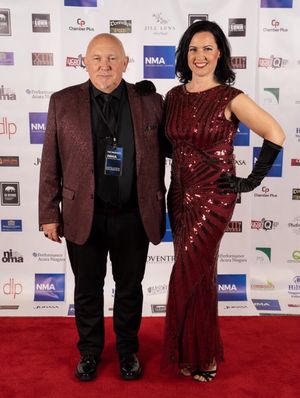